Founding of the Congregation 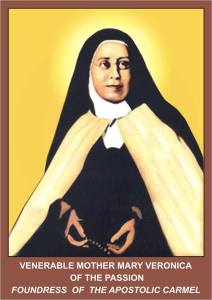 The Apostolic Carmel Congregation was founded by Mother Mary Veronica of the Passion née Sophie Leeves, a Protestant convert to Catholicism, on 16 July 1868, in Bayonne, France. Sophie was born at Constantinople on 1 October 1823, in a pious, cultured, English Anglican family. Her father, Henry Daniel Leeves, was an Anglican Chaplain to the British ambassador at Constantinople. Her mother, Marina Haultain, was the daughter of a colonel in the British army and many of her relatives were soldiers and marines. Thus Sophie inherited from her parents an indomitable courage, love for the poor, fiery ardour, perseverance in the face of difficulties, and above all deep faith in God and love for the Scriptures. She was also gifted with singular talents of mind and heart, which were nurtured by sound education and wide experience.

Under divine inspiration, young Sophie broke off her engagement to a marine officer Mr. Kenneth whom she loved much, that she “might be free to belong only to God.” Though her original desire was to become an Anglican religious and devote herself to prayer and works of charity, God was leading her elsewhere.

An avid reader, a deep thinker and ardent seeker of truth, Sophie from her early years, felt an attraction for some of the practices of the Roman Catholic Church. Her reading of the New Testament in Greek, convinced her of the Real Presence of Jesus in the Eucharist. God offered her the gift of faith at the age of 27, which she accepted without counting the cost. On 2 February 1850, she was baptized by Father Seagrave, S.J., at the Church of Gésu in Malta, in spite of the rejection she anticipated from her dear ones beginning with her own Mother, as also the Protestant Society.

A life of no ordinary prayer and sacrifice culminated in her generous response to the call to religious life. She entered the Congregation of St. Joseph of the Apparition at Syros, made her religious Profession on 14 September 1851 and took the name of Sister Mary Veronica of the Passion. Her early years as a religious were marked with mystical graces and deep experiences in prayer which strengthened her already profound faith.

As a Sister of St. Joseph, Sister Veronica was assigned to teaching, first at Syros, and then at the free school in Athens, where she looked after the poor with great love. It was here that she discovered her special vocation with the sick, the rich and the poor alike, to whom she devoted herself day and night, in spite of her own weak health. “On several occasions”, she says, “the good God gave me the grace to be able to make some sick people receive the Sacraments who would have died deprived of the help of religion…” Later, she was sent as superior to found a house and an orphanage at Piraeus, in Greece and then transferred to Tremorel, a small village in Brittany, France, where besides being in charge of the Convent and the school, she served as a nurse to the whole village and the neighbourhood, there being no doctors within the radius of several miles.

Mother Veronica was ardent and full of zeal to work for the missions in India, when she was sent to found a house of the Congregation at Calicut on the Malabar Coast, in 1862. It was here in Calicut that she read the signs of the times and saw the urgent need of the Church for the evangelization of people and the faith formation of Catholics. Just at this time, the Carmelite Bishops of the West Coast of India were convinced of the need for a teaching Order of Carmelite Sisters, to further the work of the Mission. Mother Veronica having heard an interior voice “I want you in Carmel” discerned God’s Will under the direction of Father Marie Ephrem OCD., the local parish priest, who helped her to discover her special vocation to found a Congregation of Third Order Regular of Active Carmelites for the Missions, especially for the evangelization and faith formation of young girls on the west coast of India through education and other apostolic ministries.

However, she had to surmount several obstacles before reaching the goal. It was extremely difficult for her to leave her congregation which she loved and where she was loved. When she made known God’s Will to Mgr. Barnabo, the Cardinal Protector of the Sisters of St. Joseph in Rome, she was told that she should remain where she was as God does not make mistakes. Her Superior General who did not want to lose her, appointed her Mistress of novices. This was in a way providential, as she met the Arab Postulant Mariam, (St. Mary of Jesus Crucified, canonised in August 2015) who, being rejected by the congregation of St. Joseph, was able to go to the Carmel of Pau with her and become a Cloistered Carmelite nun.

Finally, Mother Veronica painfully left her congregation and entered the Carmel of Pau on June 15, 1867 to imbibe the spirit of Carmel. On completion of her novitiate and first Profession, she was asked under directions from the Father General of the Discalced Carmelites, to draw up the constitutions for the new congregation. Having completed this task, she left her beloved Carmel of Pau in search of a place to start her congregation. For six months she roamed from place to place without any success. Finally, after having faced unbelievable challenges, utter poverty, many hardships and untold sufferings, but with unshakable faith in God in her relentless search for his will, she founded the Apostolic Carmel at Bayonne, France on 16 July 1868, with the authorization of the Very Rev. Father Dominic OCD., the then Superior General of the Discalced Carmelites and with the approval and support of Mgr. La Croix, the Bishop of Bayonne.

The first group of three Apostolic Carmelites arrived in India on 19 November 1870, and were joined by two more the following year. They were established in the Diocese of Mangalore under the jurisdiction of Bishop Marie Ephrem OCD., where, bravely facing many difficulties, hardships and inconveniences, they worked zealously and successfully for the spread of God’s kingdom. The foundress, however, in spite of her earnest desire and longing to be with her spiritual daughters, was not destined to reach India, as she had to remain in Bayonne and train more sisters to be sent to the Indian Mission.

Subsequently, however, unfavourable circumstances obliged Mother Veronica to close down in 1873, the convent at Bayonne for which she had suffered and agonized. Then, at the age of 50, she re-entered the Cloistered Carmel of Pau again, as a novice and this time made her Solemn Profession as a Discalced Carmelite on 21 November 1874, and took the name Sister Marie Therese of Jesus. Meanwhile, the infant congregation in India took root and was flourishing in spite of difficulties.

In 1875, ten Carmelite nuns from the Cloistered Carmel of Pau, including Mother Veronica and Saint Mary of Jesus Crucified, set out for a new foundation at Bethlehem where she remained for twelve years. Her stay in Bethlehem brought out a new dimension of her saintly qualities as she was offered a painful participation in the cross of her Master in a special way. After the death of Sister Mary of Jesus Crucified, she underwent terrible trials, misunderstandings, humiliations of every kind. Finally God gave her peace through the instrumentality of Mgr. Bracco, the Patriarch of Jerusalem, who helped her to accept suffering as coming from God and enabled her to leave Bethlehem and return to the Carmel of Pau.

The last nineteen years of her life were spent in peace and tranquillity at the Carmel of Pau. Truly she could say at the end, “self seems to disappear, whereas God and his mercy alone remain”. Her heroic “yes” to God, who was becoming her “All”, to an ever deepening degree with the passing years, continued with increasing ardour. Her gift of mystical prayer along with her thirst for asceticism made her increasingly humble and compassionate of heart. She prayed and made penance unceasingly for her sisters in India whom she loved dearly, and with whom she kept in touch through correspondence. Her life of loving surrender to God under challenging circumstances culminated in her holy death on 16 November 1906.

Mother Veronica’s Cause for Beatification and Canonization was introduced on 16 July 1999, by Most Rev. Dr. Ignatius Paul Pinto, the Archbishop of Bangalore at the Apostolic Carmel Generalate Bangalore and she was declared Venerable by our Holy Father Pope Francis, on 9 July 2014. We are now looking forward for the day when she will be raised to the honours of the Altars, so that she becomes a greater source of inspiration to all those who wish to follow Jesus in the Apostolic Carmel way of life.