Province at a glance

The genesis of the Province of Karnataka must be traced way back to 1870 which saw the beginnings of the Apostolic Carmel in India. In fact the historical roots of its existence are inextricably woven with those of the Congregation itself.

In November 1870 when the first batch of sisters arrived at St. Ann’s Convent, Mangalore from Bayonne, France there was already a group of sisters, the Carmelite Tertiaries founded by Bishop Michael Antony ocd who was the Bishop of Mangalore before Bishop Marie Ephrem ocd. This institute was founded mainly for education and the care of the poor Catholic children of the West Coast. When Bishop Michael Antony resigned his office in 1870, these sisters joined the Apostolic Carmel Sisters who had arrived from Bayonne.

In 1971 five Pro-Provinces were erected “ad experimentum”. The newly constituted Pro-Provinces were not identical with the geographic boundaries of the Regions and there was a re-grouping of convents. The Mysore Pro-Province comprised all the convents in the State of Mysore with the house opened at Pavur in the North Cannanore district of Kerala.

January 24th, 1974 ushered in a new era in the Government of the Institute during the tenure of Mother Carmelita. The newly erected Provinces emerged as a substantial unity with rich diversity. The erstwhile Mysore Pro-Province was re-named Karnataka as the State had changed its name for historical reasons in 1972. The Karnataka Province was now “old” and “new” as among its 29 houses were some of the earliest foundations: St. Ann’s the Mother House hallowed by the memory of Mother Veronica, Foundress and the First Superior General, Mother Marie Des Anges; St. Agnes Convent, the first foundation of Mother Aloysia, St. Cecily’s Convent, Stella Maris Convent and Annunciation Convent, Ladyhill, the first houses of the Institute.

The Novitiate (Formation House) which was at Maryhill, Mangalore closed in 1994 and on May 30, 1994, God blessed the Province of Karnataka with its own Novitiate ‘Sannidhi’ at Stella Maris Convent, Kotekar which was blessed by the then Bishop Basil D’Souza.

The Province has the joy of the development in its Mission of Education from the handful of seeds sown by the Pioneers with initially small but fervent zeal. It has St. Ann’s College of Education and St. Ann’s Teachers’ Training Institute and Carmel D.Ed. College to form dedicated teachers, St. Agnes College (Post Graduate and Under Graduate) and Carmel College. There are seven P.U. Colleges, nineteen High Schools, twenty two Primary Schools along with Kindergarten and Play Schools, Balwadis and Anganwadis. There are four Central Schools offering CBSE/ICSE scheme of syllabus.

Though the main Apostolate of the Province is education, the Province has ventured into other mission areas. As a Centenary Memorial, St. Agnes Special School was established in 1971 in Mngaluru. It has started courses in B.Ed., D.Ed. and PG Diploma in Special Education. There is also a Vocational Centre established to provide trade for the mentally challenged adults.

The new mission at Bailhongal, caters to the mentally challenged and persons with disabilities through the Special School and the CBR programme. Four of our sisters serve in a Special School Anugraha run by the Diocese of Bellary.

Drug addicts, Alcoholics and AIDS victims are also catered to mainly in Bidar and Bailhongal with a sister doctor assisting them. Empowering of women is another aspect which has resulted in creation of more than 20 Self Help Groups. The mission at Lingsugur was started to make Christian presence felt there. The Missions of Bidar and Jyothi Nivas are directed towards the development of the poor and disadvantaged. The sisters at Jyothi Nivas mainly look after the labourers’ children. In 2006, the Technical Institutes of Vijaymari and Bidar started Community Colleges where courses are designed through linkages with industries and the students after completing the respective courses are absorbed immediately through campus recruitment.

The Carmel Niketan Convent inaugurated on June 24, 2017 caters to the least and the lost families of Bidar. The Sisters are involved in Socio-Pastoral work; they render spiritual ministry to the Catholic families of Jamgi Colony, families of Dhumsapur, Gumpa, Mailoor Cross and GND College.

There are seven Hostels, five Boarding Houses and seven Homes for Children where sisters see to the welfare of the students and children making it a home away from home. A few sisters work as nurses in the hospitals.

The sisters of the Province also work in Schools under the Apostolic Carmel Generalate Management, and the Diocesan Board Management in Haliyal, Ganguli, Pezar, Bidar, Shivamogga, Pavur and Kundapura. 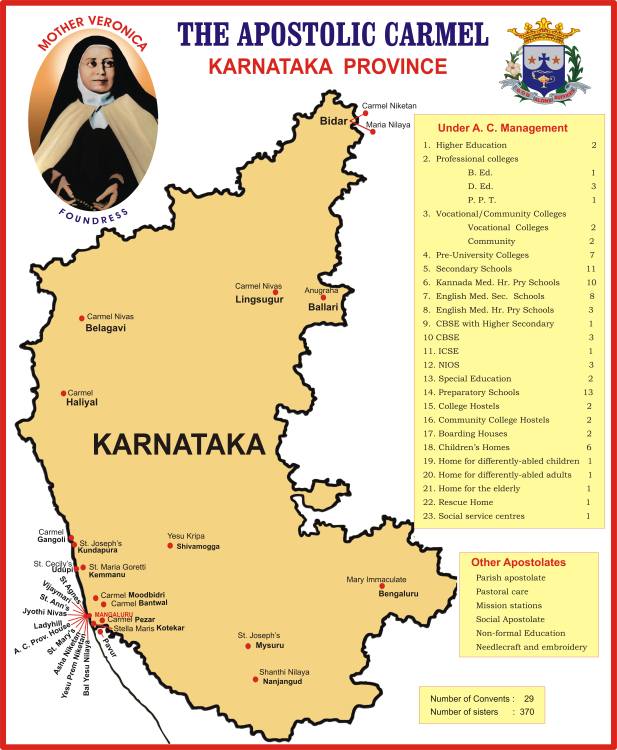