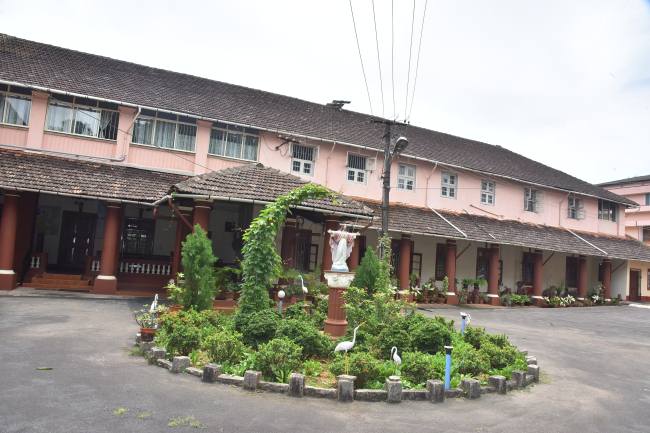 The history of St. Ann’s Convent has its beginnings in the year 1859 A.D., when the Vicar Apostolic of Mangalore, Msgr. Michael Antony O.C.D., an Italian prelate, invited the sisters of the Congregation of the Sisters of St. Joseph of the Apparition to open a convent and school for girls in Mangalore.

The Sisters’ Convent and the school were located in a spacious building called ‘the Bungalow’ which was located about half a kilometer away from the Old Mangalore Port (the Bunder). The Bishop named the convent and the school as St. Ann’s. Though the sisters were successful in running the school, the first of its kind for girls in the District, the collapse of a section of the school building on June 21st 1866 caused the Bishop to shift the sisters and boarders away to another building at Jeppu and to close the school.

In the year 1870 when Bishop Marie Ephrem O.C.D. was appointed Bishop of Mangalore, Mother Veronica under his guidance sent three sisters whom she had trained, as pioneers to Mangalore. The three who arrived at Mangalore on 19th November 1870 were Sister Elias Divine, Sister Marie des Anges and Sister Mary of St. Joseph. They were accompanied by three cloistered Carmelites. Two more Apostolic Carmelite sisters, Sisters Agnes and Cecilia joined later in 1871.

During the year 1894 – 1896, Mother Marie des Anges built the present convent of St. Ann’s and its beautiful Chapel. The stained glass panels set high in the wall of the sanctuary above the Altar was a gift from the Foundress Mother Veronica who had received them from her benefactress Madame Gil Moreno da Mora.

In 1910 Mother Aloysia was elected as the second Superior General of the Apostolic Carmel but she continued to be the Superior of St. Ann’s Convent, one of her assistants acting as superior in her absence. St. Ann’s Convent was the Mother House and it continued to be the headquarters of the Superior General until 1966. St. Ann’s was also the Formation house until the Novitiate was shifted to Maryhill in 1938 and the Postulancy in 1961.

Ladyhill Victoria Girls’ School, St. Mary’s School, Falnir and St. Agnes School and College had their beginnings from St. Ann’s until the Convents were opened in each of these places.

The educational institutions under St. Ann’s Convent in its campus are:

St. Ann’s premises are also a hallowed spot where St. Mary of Jesus Crucified (St. Mariam Buoardy) lived for two years. She was one of the pioneers who landed at Mangalore from France in 1870. She was canonized in 2015. The cell (room) which she occupied and the chapel where she pronounced her First Vows are converted into an Oratory. A brief sketch of her life and her words, uttered while in ecstasy, adorn the walls. Her bust in the garden marks the place where she had her levitation.

The year 1970, the Centenary Year of the landing of the Apostolic Carmel sisters in Mangalore, India was also the Centenary of St. Ann’s Convent. A Mass for the deceased sisters was offered at the Rosario Cathedral followed by a get-together of old students on St. Ann’s grounds.

In the year 2017, the Apostolic Carmel Congregation is marching towards the sesquicentennial celebrations of its founding and St. Ann’s Convent, of the landing of the first three A.C. sisters in Mangalore in 2020.  Definitely St.Ann’s, the cradle of the Apostolic Carmel in India has made a difference in the families and lives of the people of Mangalore!