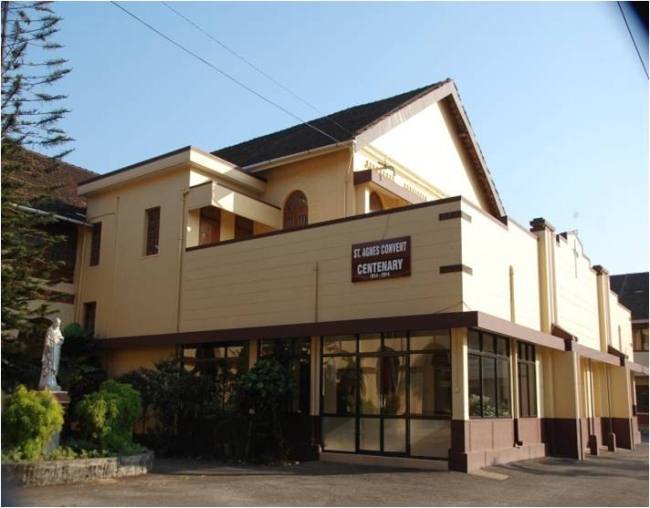 St. Agnes Convent was the second convent of the Apostolic Carmel in Mangalore.  After five years of assiduous search and negotiations for some twenty different sites, a plot of “Hulli Mulli”, an arid area belonging to the ancestors of Sister Julia and the surrounding plots which were inhabited by sixteen proprietors in clustered huts and cottages measuring twelve acres of land were bought on June 29, 1913.

February 8, 1914 was a memorable day in the history of the Apostolic Carmel when Dr. Paul Perini, the then Bishop of Mangalore blessed the whole property and laid the foundation for St. Agnes Convent. The next day a Secondary English Medium School, as it was called then, was opened with Classes I and II. There were 80 pupils on roll. A week later, an elementary school was opened for the poorer children with 46 pupils on roll. Mother Aloysia chose St. Agnes as the patron saint of the convent and of all the institutions on the campus with the motto “God is our Strength”. Young girls desirous of studying in English medium flocked to St. Agnes Convent from Udupi, Kallianpur, Kundapur, Karkal, Mulki, Kinnigoli, Belthangady and other surrounding villages. The original old cottages were fitted up as dormitories and a boarding house was started.

Realizing that girls from their sheltered homes would hardly dare to go as far as Madras, Mother Aloysia envisioned higher education for girls. July 2, 1921 was another day of significance in the history of St. Agnes when a college was started under her dynamic leadership and far sighted vision. St. Agnes First Grade College was the only one for women in South India and the first in the whole of India to be run by an Indian private management. To meet the ever growing demands for admissions that came in from the rural areas a temporary “L” shaped building was put up on the plot closest to the road. This block stood for 82 years when more spacious buildings came up to accommodate the growing number of students.

Mother Theodosia another woman of caliber and a dynamic personality with practical experience took charge as Principal in 1934. She took the initiative of introducing Science into the Intermediate Course, an option till then not available to women. By adding subjects such as Mathematics in 1936, Natural Science in 1937 and Chemistry in 1939, the College gradually blossomed. Through the years under the leadership of Principals and faculty with dynamism and commitment, St. Agnes College has grown with several more courses and programmes. In 2007 St. Agnes College obtained academic autonomy. Soon after, the Post Graduate Programmes were introduced and another block was erected for the same.

The Intermediate Course was changed into Pre-University in 1955 and at the same time St. Agnes College parted ways from Madras University with the re-organization of States and was affiliated under Mysore University. In 2001 St. Agnes Pre-university College was bifurcated and was accommodated in a new building.

The year 1970 was a landmark in the history of the Apostolic Carmel, the year of the Centenary of the establishment of the Apostolic Carmel in India. The pioneers of girls’ education in Mangalore had fresher avenues to explore and the education of children with disabilities was found to be the best Centenary Memorial to fill this void in Mangalore as there was no provision for the education of children with disabilities, in particular, the mentally challenged children. St Agnes Special School, the first school for the mentally challenged in the district, was inaugurated on August 4, 1970 with five children, in ‘The Rest’, a cozy house on St. Agnes Convent premises with the motto, ‘In Love We Grow’. In 1973 the children were shifted to the premises opposite St. Agnes Convent in the new building that was constructed.

22nd August 2015 was a red lettered day in the annals of St. Agnes Convent.  It was a day of rejoicing and joy when we officially inaugurated and blessed the New Double Gate. A centenary gate with an impressing arc to top it and paintings of St. Agnes, the Patron Saint came down and a new spectacular structure and double gate came up to announce the beginning of the second centenary.

The mission of the sisters of St. Agnes Convent in educating the youth from Kindergarten to Post graduation has attained fruition where more than 5500 students illumine the campus today not merely aspiring towards academic excellence but very importantly using the many opportunities for strengthening faith and values of the students. Besides educating the youth, the Sisters offer humane services to the local church and the society at large in every possible way. In 1998 the Apostolic Carmel Association (ACA) was started for the purpose of sharing the spirituality of the congregation with lay people.

With heads bowed and hands folded in gratitude to God, as we, the Sisters of St. Agnes Convent thank God for the numerous blessings on the Convent and the Institution for the past years.  We remain ever grateful to God in transforming the Hulli Mulli Hill into an educational hub, a light house, a city built on the hill where hundreds of students have been educated and enlightened over the past hundred glorious years and sent out to the wide world as the ambassadors of St. Agnes to proclaim to all people that God is our Strength.