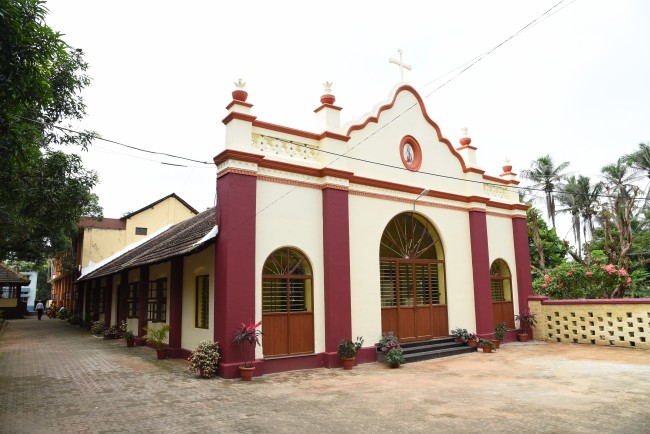 An urgent need was felt by the women who were educated in ‘The Caste Girls’ School’ in Dongerkery, Mangalore run by the Apostolic Carmel Sisters to have such an education for their daughters too. So in 1918 they requested Mother M. Aloysia, the then Superior General of the Apostolic Carmel to open a Secondary Grade School in Udupi. Simultaneously, a very influential Catholic landlord in Udupi, Mr. Piadade Alva by name, wanting Convent Education for the Catholic girls of Udupi, drew up a petition signed by the parents of the place irrespective of caste or creed and forwarded the letter to the Ecclesiastical and Convent authorities in Mangalore.

Mother Aloysia approached the Bishop to discuss with him about the project, while the Bishop himself was contemplating of starting a school in Kallianpur and wanted to ask Mother Aloysia to do the needful. Finally it was decided that The Apostolic Carmel would start a school in Udupi. Thus on 18th May 1918 the Apostolic Carmel Sisters arrived in Udupi. Their first residence was in Kadbettu which was known as ‘Kadbet Bangalow.’

On 20th May 1918, the school started with nine children on roll with the first three classes having English as the medium of instruction. As is the story of every new foundation, the Apostolic Carmel in Udupi also had to face many difficulties and challenges.  As the process of getting recognition for the Secondary School, was slow, the Superior General Mother Aloysia thought of withdrawing the Sisters from Udupi. But by God’s grace the Sisters were able to get the recognition of the Secondary School and sanction of the Building Grant from the Governor of Madras.

Consequently a building to accommodate the increasing number of students was built and a boarding house was started in a rented house in April 1922. The girls from neighboring villages started coming to St. Cecily’s. Some had to be accommodated in the boarding house. After securing the permission from the DPI, a new school building was constructed and completed on 3rd June 1922.  The Sisters and boarders started staying in the new block from 20th April 1923.

The foundation stone for a new convent was laid in 1925. Fr. Casmir Menezes with the help of a contractor undertook the construction of the convent [including the Chapel] and school. Mr. Sebastian Andrade supervised the building work. The new Convent was inaugurated on 26th May 1926 and the Blessed Sacrament reserved. Thus, after waiting for eight long years, the Sisters at last had the comforting presence of Jesus in their midst. Fr. F. Pereira was happy to celebrate the Eucharist daily in the chapel from October 1926.

Forms I, II, and III moved to the new school block. In 1933 St. Cecily’s became a fully fledged Secondary School and the number of students shot up to 204.

Besides the Apostolate of Education, all the Sisters of the Community render their valuable services to the local Church and visit the families in the parish and homes of the students. GOD BE PRAISED.   LONG LIVE ST. CECILY’S!