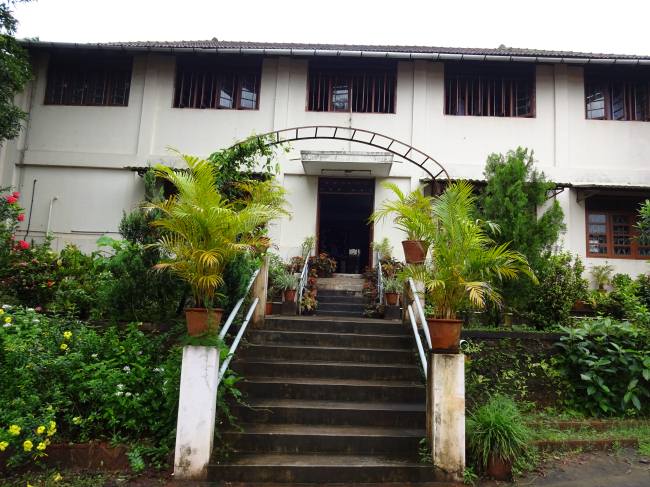 After establishing St. Ann’s institutions firmly, Mother Marie des Anges’ attention was drawn further afield as the high class Hindus of Mangalore petitioned her to open a School for their daughters. In compliance with this request and encouraged by the Director of Public Instruction, Mother Marie des Anges opened an Elementary School on March 19,1885 on the premises of St. Ann’s School which was first known as St. Ann’s Kanarese School. Shortly afterwards, a place was secured at Dongerkery where a new building arose.

In 1887, the year of the Golden Jubilee of Queen Victoria, the school moved into this new building and it was renamed as the Victoria Caste Girls’ School. The School progressed rapidly and in 1889 received Government recognition as Middle School and in 1892 English became the medium of instruction. 1918 was the Golden Jubilee Year of the beginning of the Apostolic Carmel at Bayonne, France. Hence a fitting Jubilee Memorial was thought of; Sister Mary Frances suggested that a Convent at Ladyhill be constructed.

In 1920, Mother M. Aloysia the then Superior General constructed a spacious school building which was blessed on 25 March 1921, the Feast of the Annunciation after which the Victoria Caste Girls’ School was shifted from Dongerkery to Urwa.

From June 1922, a small group of Sisters, Sisters Frances (Superior), Dorothy, Ignatia and Bridget came to reside at Ladyhill. The foundation stone of the new Convent building was laid on 30 August 1922, by Father A.J. D’Souza, the then Vicar of the Urwa Parish. The first Mass was celebrated in the Convent Chapel on 17 February 1923.

Until 1927, the school at Ladyhill was a branch of St. Ann’s High School. The Inspectress being impressed by the performance of the students asked the Management to send up a petition to the Education Department to set it up as an independent School. Form I was opened in 1927 with seven pupils on roll. Ladyhill School was raised to the status of a High School in 1940 and Form IV was opened with 46 students on roll. The first batch of 28 students was sent up in March 1943 for the SSLC examination and got cent per cent passes.

Ladyhill celebrated its Platinum Jubilee in 1996; the Platinum Jubilee Memorial to house the English Primary and the High Schools was completed in three phases. The labour and effort of Sr.Nirmala Francis in this venture is praiseworthy!

The Pre University College was opened on July 1st 1999 with Sr.Rose Agnes as the first Principal. On November 25 2015, the Ladyhill English Primary School inaugurated a new Block on the top of the hill as its Golden Jubilee Memorial. A new Preparatory School Block was constructed and inaugurated by Sister Carmel Rita the Provincial Superior in 2016.The Sisters offer their services in the Parish by actively participating in all its undertakings. Ladyhill is marching towards its Centenary celebrations!