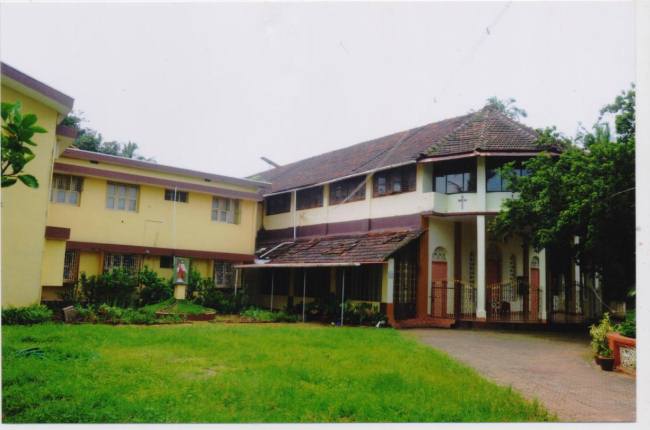 Kundapur was a little hamlet along the coast of Arabian Sea surrounded by natural beauty. The people then were economically poor and illiterate.  Then chief occupation was fishing.  The plight of the people moved the Bishop who felt the need of doing something for them.

At the request of Bishop Valerian D’Souza, the then Bishop of Mangalore the then Superior General, Mother Josephine along with the Sisters Columba, Ita and Pulcheria arrived at Kundapura on March 24 1930,on the eve of the feast of the Annunciation. They stayed in the upper storey of a small house belonging to Miss Lucy Buthello.

The apostolate of the Sisters was clearly defined by the Bishop. There were girls for whom classes had to be held, adults for whom a work room and language classes were to be held and the poor destitute children to be housed in the Orphanage.

Keeping in view the above mentioned objectives Sister Coloumba with the pioneering band of sisters began the spade work in right earnestness to implement the project.  By November 1930 the apostolate took some sort of definite shape. The new School Block was blessed on November 7 1930 by the Vicar Capitular Msgr V.R. Fernandes.  Classes up to Std. IV were opened and the work room included rope making and flower making.  A couple of poor girls were received to form the nucleus of the orphanage.

Sister Columba worked for the recognition of the Orphanage so that it would be entitled for Grant from the Government and in March 1932, after much correspondence the first grant of Rs.216/- was released.  Each scholastic year saw the addition of one new class.  Through the kind interest of the Inspectors - Mrs. Shakuni the first School Grant of Rs. 849/- was cashed on the March 24th  1933, exactly after three years of the arrival of the sisters.

The Primary School flourished and brought laurels to the Institution and was considered to be one of the best in the District.   In June 1947 the Secondary School was started and everything went on well.  But then like a bolt from the blue the school had to be closed down because of the Endowment scheme passed by the Government.

However due to the untiring efforts and self sacrificing spirit of Mother Attracta, the sanction from the D.P.I.to open Form IV was obtained in June 1951.  And from then on the School progressed steadily, giving importance to faith and character formation along with academic excellence.

The children in the Orphanage kept increasing and under the loving care, concern and vigilance of the wardens, they bloomed and flourished and most of them are doing very well in life and are grateful to the Institute.    As the fruit of the hard labour of the sisters, vocations flourished and this school has given fine vocations to our Institute and also to other congregations.

The seed sown in 1930 has now grown into a mighty tree and is firmly rooted in the soil of Kundapura. The aim and purpose for which the Convent was founded is being carried out, keeping in line with the present trend by the Superior and the Sisters who have laboured in this part of the vineyard. The Sisters offer their services in the Parish and reach out to the people in need.