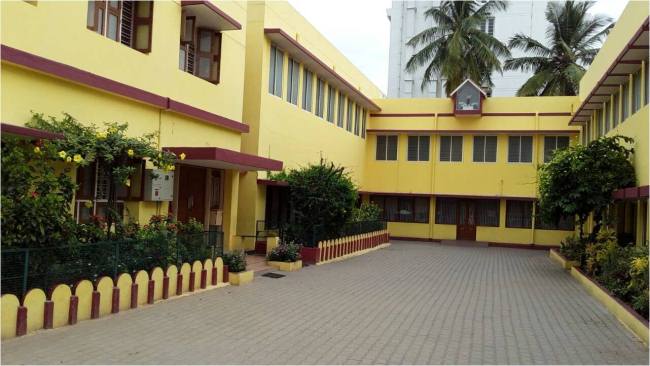 On 1st February 1959, Mother Theodosia the then Superior of St. Agnes Convent wanted to buy a house in Mysore, to serve as a house of studies, for sisters, who had to do Post- Graduate courses in Mysore and for the convenience of those who had to go to Mysore for meetings and other official work attached to it.
Meanwhile the Sisters approached the then Bishop of Mysore Rt. Rev. Msgr. Rene Feuga and the auxiliary Bishop A.V D’Souza, to seek permission for a house in Mysore. Bishop Feuga gave his consent and offered two plots – one at Jayanagar and the other at Tilaknagar near St. Philomena’s College. On 29th of May 1960 Mother Theodosia authorized Sister Philomena to go ahead with the negotiations for the purchase of Mr. Dorai Chetty’s plot in Bannimantap. Mr. Dorai Chetty was good enough to offer to our Sisters the price at which he had bought it; the cost of the house was Rs. 14000/-. Through the kind intervention of Bishop A.V D’Souza the land was bought and the sale deed registered in 1962.

On 1st March 1963, Sisters Electa and Eulogia, left Bangalore for Mysore. The Vicar of the Cathedral Rev. Fr. Mathias Fernandez arranged a vehicle to bring them from the bus stand straight to the Parochial house. The Vicar and the people gave them a warm welcome and then they were brought to their neat, little cottage on an elevated ground, a bright and open and healthy spot. Fr Denis Noronha came in the evening to hand over the keys of the convent. On 5th March the Superior General arrived with a few sisters from Bangalore and at 5 p.m. Bishop Feuga blessed the new house and gave permission to reserve the Blessed Sacrament.

In the beginning 50 poor children were given C.R.S food. Later the number increased to nearly 100 children. The Community helped 500 families through Mother and Child programme, sponsored by the C.R.S. Sisters visited the slums in the neigbourhood and helped them. Three families who had given up their faith were brought back to the true faith. Sisters visited the Home for the Aged and tried to help them in whatever way they could. They adopted five families under the Anthyodaya Scheme. Sisters helped them to become self –sufficient. The poor children of the locality and school were helped with clothes, books, stationery, etc. every year. Occasionally they visited hospitals and kindled joy and hope in the patients.

Sufficient accommodation for lodging guests was not available. The Superior General immediately made arrangements to build two more rooms. The Bishop was very keen to open a hostel for the students of St. Philomena College and Mother Theodosia immediately responded and planned to build a hostel for girls. 35 boarders were admitted into the hostel.

In the beginning the institution had no plan to put up a school building. The main purpose was to do some social work and bring up the poor children and their families in the neighbourhood. They were given moral instruction daily. Sisters also trained them regarding cleanliness, home keeping and dignity of labour as well as to bring up a little garden in their surroundings. Few ladies were trained in tailoring too.

Year after year additional classes were opened up to VII Standard. In 1973 the School received permanent recognition. The Apostolic Carmel owes its gratitude to Mgr. Ignatius Pinto and Sister Margaret CSST from Avila Convent, Mysore who met personally the Educational Authorities concerned to expedite this work.
All the Sisters were actively involved in teaching Catechism to the children and First Communicants and were in-charge of the Liturgy. Sister Electa was appointed as the first Superior of this convent.

Today St. Joseph’s school stands as a mighty tree sheltering nearly 2000 students with highly qualified teachers. It is one of the most leading and prominent Educational Institutions in the city. We praise God for His blessings and His protection all through the years.