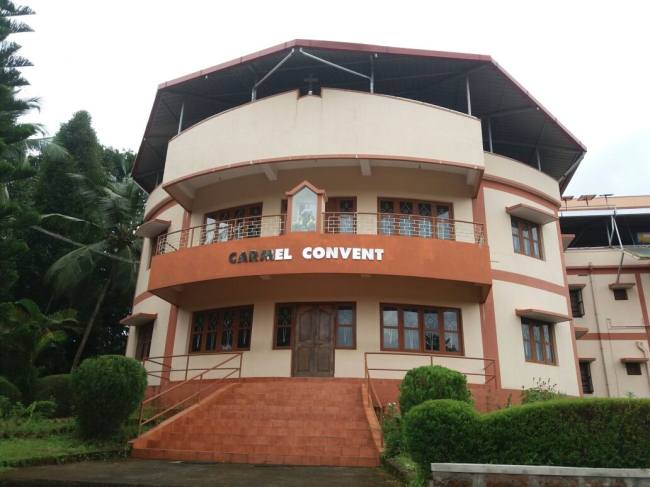 Carmel Convent, Modankap was founded in the year 1963. The then Pro-Nuncio Cardinal James Knox, during his visit to Mangalore told the then Superior General, Mother Theodosia A.C. that the educational and medical apostolate of the Sisters should reach out to the villages. God’s plans are marvelous. Just at that time Rev. Fr. Edwin Castelino, the then Parish Priest of the Infant Jesus Church, Bantwal expressed the need for a High School for girls since the parish had only a primary school both for boys and girls. Since there was no High School run by the Diocese, the Catholic girls either went to a Hindu High School which was far away or would go to Mumbai as domestic helpers or would stay at home.

With the purpose of strengthening the faith of the young girls, providing employment to better their prospects and build a good family, the sisters responded to the invitation of the parish priest and the three pioneering Sisters, Sisters Concetta, Avita and Concessa landed at Modankap on 29th May 1963. They stayed in a small house in the vicinity of the Church that belonged to the Parish. In the meantime Mr. John Gonsalves, an advocate from Mangalore helped our sisters to purchase a plot of land about 4.22 acres. Mrs. Carmine Machado, mother of Late Sr. Mary Machado A.C. was a good neighbor and supported the Sisters in many ways. On 1st June 1963, the Parish Priest lent an enclosed stage of the Parish School as the classroom for Std. VIII with 40 girls on roll and quickly the number increased to 53. On 1st July 1963 a part of the school building was ready for the students and on 28th September, the Sisters shifted to the new building. The first batch of 34 students appeared for the SSLC examination out of which 32 were successful bringing 94% result to the School. From the same batch five students joined the Apostolic Carmel and five to other Congregations. Among the A.C. sisters, were Sister M. Linette, (former Provincial Superior), Late Sister Benedicta Baretto and Sister Chrissie. The school was the fertile ground for vocations till recently.

The mission of the sisters grew tremendously. In 1970 a second section was added to Std. VIII and the strength went up to 374. The next mile stone was the opening of the Pre-University education for girls; 72 girls were on roll when the college started in 2000. A new block was constructed to accommodate the PU students and boys were admitted to the PUC in 2002. Now with Arts, Science and Commerce there are above 600 students in the PU College. In 2007 a new Convent Block was built.

In 2010 additional adjacent land was purchased for the next milestone in the history of Carmel Convent, the Carmel College affiliated to Mangalore University with B.Com and B.B.M. classes enrolling 100 students. Later B.C.A. and B.A. courses were introduced. At present the campus is bubbling with life with 1200 students. Besides education, the Sisters are involved in the Parish Ministry in teaching Sunday Catechism, taking up Marian Sodality, Altar Boys and Girls Association, assisting as Sacristans, Eucharistic Ministers and members in the Parish Council, Spirituality Committee, Varado SCC Core Committee and SCC meetings and other social apostolate. The sisters of Carmel Convent continue the mission started by the pioneering sisters with much love, zeal and commitment.