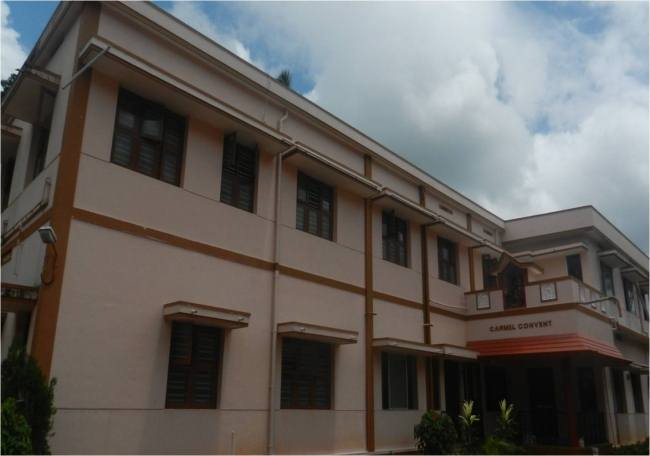 “The light of Christ must shine in every nook and corner of Moodbidri- a tourist centre of Jainism”. This inspiration of Rev. Fr. F.X. D’ Souza was realized in 1964 through the erection of a High School for girls and for the faith formation of Catholics. Sisters Sophia, Louisa, Clarice and Florina were the pioneers of this Convent. The generosity of providing the Sisters with a place to live and for the school building by Mr. Louis Pinto and Mr. B.A. Saldanha will ever be remembered.

The new school building and the convent was ready by August 1965. Sister Bernardine was the first Superior of the Convent from 1964 – 1967. The first batch of students was sent for the S.S.L.C. exam in 1967 and the school secured 92% results with nine of them joining the religious life. In 1968 the new chapel was blessed by Bishop Basil D’ Souza. The school got recognition from the Board in March 1971. In the same year a new parish was erected in Moodbidri with Rev. Fr. Henry Machado as the Parish Priest. Sisters attended daily Mass in the parish and rendered their services in the sacristy and liturgy. The Convent was the venue for the quarterly meeting of the CRI. The School conducted the Karkal Taluk Athletic Association Meet in 1976, at the Swaraja Maidan, Moodbidri. All appreciated the team spirit shown in conducting this Sports Meet. In 1983 Sister M. Lucella received State Award for Education from the Educational Department.

In 1989 boys were admitted to the school and a new auditorium was inaugurated. In July 1990 plans were finalized for the construction of a much needed auditorium which was completed in May 1991. Sisters have rendered their valuable services to the Rotary English Medium School during these years. The compound land was utilized for coconut, cashew and jack fruit plants and teak plantation with a strong boundary wall built.

In 2002 the Holy Rosary Composite PU College was started as the Memorial Block of the Silver Jubilee of the Holy Rosary High School. The school became the centre for the SSLC examination. A play ground was bought from Mr. Jayaram Shetty and a bore well sunk. The Alumni Association was inaugurated in 2010. In 2011 the foundation for a CBSE School was laid. The Holy Rosary School celebrated its Golden Jubilee in 2013-14 and the Carmel CBSE School was inaugurated in 2013 as the Golden Jubilee Memorial Block. The number of students in the CBSE section is on the increase. The school is accredited with “The International School Award” by the British Council. We praise God for the marvels worked. We continue to trust in the providence of God for the years to come.

Contact Details:
Carmel Convent
Near Range Forest Office
Moodbidri – 574 227
Karnataka
Ph. No. (08258) 236351
email: This email address is being protected from spambots. You need JavaScript enabled to view it.