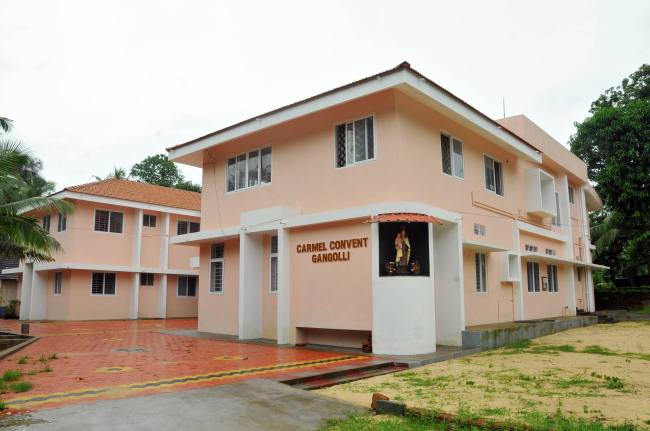 ‘Gangolli’ known as ‘Pancha Gangavali’ is the meeting point of five rivers which immerse themselves into the Arabian Sea. It is a small coastal village housing around 15,000 people. Because of its geographical setting, it was famous for Manganese transport and fishing which is why one of the bus-stops is named as ‘Manganese Road stop.’ Moreover, fishing business lends itself to a lot of travel and hum-drum activity throughout the year.

Given the cultural, traditional background of families about fifty years ago, there was hardly any importance given to education particularly to girls who never stepped into High School classes. Most of the girls never went to school and even if they did, they stopped schooling at the primary level itself. Hence their lives often turned out to be pathetic.

It was in 1966, Fr. Michael Noronha the Parish Priest of the Immaculate Conception Church, Gangolli, realized the dire need of education for young girls. Discussing the matter with the local leaders and much against the opposition of the neighbouring school authorities, he managed to obtain permission from the Governor of Mysore to open Stella Maris High School, Gangolli. He then handed over its management and responsibility to the Apostolic Carmel during the tenure of Mother Theodosia – the then Superior General.

Mother Theodosia, the great visionary rose to the occasion and accepting the golden offer, sent four sisters to start the mission of education. With our Congregational Motto ‘God Alone Suffices’ and taking the blessing of our Higher Superiors, the four sisters – Sisters Lawrence, Edilburga, Serena and Basilissa set out to pioneer this mission with great zeal and ardour.

It was on June 11th 1966, Fr. Michael Noronha blessed the thatched shed – the abode of the sisters placing it under the patronage of our Lady of Mount Carmel and naming it ‘Carmel Convent.’ On June 13th, the Inauguration and Blessing of the school took place. Sister Edilburga was appointed as the Headmistress of the High School and she took up the reins with great zest. The High School was just a thatched roof shed in the church campus. Sister Edilburga left no stone unturned to develop the standard of the school in every way.

Meanwhile the Parish Priest Fr. Michael Noronha offered site no. 125/10A to put up the School building which was blessed on 23rd February 1974. To keep the stability in student strength and keeping in mind the education of poor children, ‘Kripa Griha’ a home away from home was opened to cater to the education of distant poor, needy village children. Later, in 1984, when the student strength was coming down, the school began admitting boys and in 1995 when there were only two students in ‘Kripa Griha’, it was kept open for failed students of Std. X and giving them free coaching to help them clear the supplementary examination.

The changes in society and the effects of globalization, led students to move to English Medium schools and this was a great concern for the future of the mission. Hence an English Medium School started much against the opposition raised by the local school. It was started in June 2007 with L.K.G. and High School sections. This gave rise to the need of a proper building for both Kannada and English medium schools. With the resources and the support of the Province a new school building was put up under the leadership of Sister M. Archana.

This year 2016 marked the golden year of the starting of the mission at Gangolli. Both Carmel Convent and Stella Maris High School celebrated the Golden Jubilee with much rejoicing, giving praise and thanks to God for the manifold blessings experienced over the past 50 golden years. On this occasion a long awaited dream was fulfilled with the blessing of the new Convent Building on December 17th 2016, by the Bishop Most Rev. Dr Gerald Isaac Lobo and inaugurated by Sister Carmelrita the Provincial Superior.

This mission has proven its quality in a number of ways. People of this place irrespective of caste, colour or creed have great love and regard for the Sisters saying, ‘It is because of the Sisters, the children have received good value based education’. Hence people show much love, warmth and are truly loyal to the Sisters. The school has encouraged many religious vocations who are serving in different parts of the world.

We place on record the dedicated hard labour put in by both our Sisters and the teachers for the well being of our students who in turn make our Carmel Legacy last for years to come.