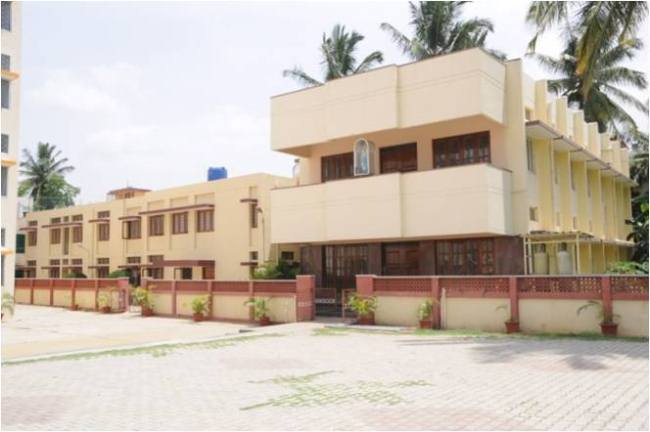 His Excellency Dr. Thomas Pothukumary, the then Archbishop of Bangalore had invited the Apostolic Carmel to start a College. But due to the lack of personnel only a Nursery School was started in the year 1958, with one pupil on the roll. Within six months the strength of the class rose to 58. The medium of instruction offered was English.

When the Sisters first came to Mary Immaculate Convent in 1958, it was outside the city limits. It was the village of Lakkasandra. There were hardly any house there; in fact, the big quarry posed a great threat to the people. Only after the Apostolic Carmel Sisters developed ‘Mary Land’ did people venture to buy sites in Lakkasandra. What is called now as Laljinagar, Gupta Layout etc were never heard of in 1960’s or 1970’s.

In 1968 Mother Theodosia opened a second house in Bangalore. It was started in a small rented building and was named Mary Immaculate Convent. Sisters Philomena, Emma, Imdeldine, Gonzaga Mark and Carmine moved into 13th Cross rented house form Lourdes Convent, the parent house. Lourdes Convent, Jayanagar helped the pioneers in a big way. Mary Immaculate Convent came into existence on 7th July 1966. Mary Immaculate School was founded in 1958 with one pupil on roll, in a rented house, on V Cross for the benefit of the children of Wilson Garden and the neighboring extensions. Within six months the strength of the class rose to 48 and today it has grown in leaps and bounds.

In August 1968, the foundation stone was laid for the construction of a compact school building and a year later, 1 September 1969, the new school building was blessed. On 7 December 1974, Mother Carmelita laid the foundation stone for the new convent building on the school campus, which was completed in March 1976. As the place was limited, a storied building, with 6 rooms and three more on the existing terrace, was put up. The inauguration and the blessing took place on 12 November 1987.

Reading the signs of the time, the changing scenario in the field of Education and at the request of the educated parents, the Management ventured into the new vistas that is to change over the State syllabus to Indian Council for School Certificate Examination (ICSE). It was an arduous journey to get the NOC from the Government. The Principal Sister Maria Laila left no stone unturned to bring in the political influence to get the NOC from the State Government and finally on 1st Oct. 2012 the School got the NOC and on 19th Nov. 2013 the Temporary Affiliation without much difficulty as the school had the entire needed infrastructure. The first batch of 31 students of class X moved out with distinctions. Today both streams ICSE and State board of education is carried on in the campus.

There was nothing but barren waste lands with a horrifying quarry in front 1970’s. A ‘Malla’ behind and open sewage gutters of unauthorized houses of slum dwellers around! Today if one stands on the terrace one cannot find even 10 sq. feet of free land. That is the marvel of the presence that has accomplished not of course discounting on the progressive advancement of the city, its population, its industries, and its technology.

The Sisters are happy that a new culture and refinement has evolved, because Education has extended to this lower middle class people, as well as Christ’s values entered into their homes.