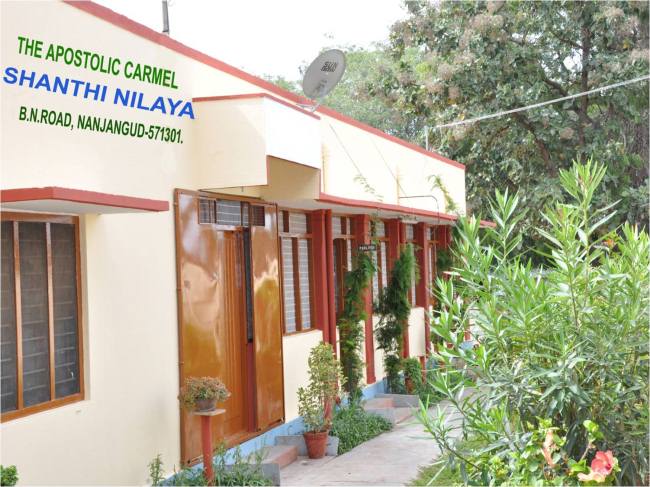 The beginning of Shanthi Nilaya, a story of pioneering adventure of faith in God and of much personal sacrifice on the part of Sister Carmencita, the Superior of St. Joseph’s Convent, Mysore, for the education of little ones was indeed a God given task which had to be undertaken at once. It was God’s call through Mr. Thomas D’Souza a copper merchant, a leading Catholic of Nanjangud who approached the Bishop several times to open a Catholic School for the few Catholics of Nanjangud. To the repeated requests of the Bishop of Mysore, Mother Theodosia the then Superior General opened the Convent on 15th September, 1968. Fr Patrick Saldanha blessed the house and offered the first Mass with Sisters Carmencita (Superior), Fidele and Katrina as the first community members. The Sisters started teaching in the school, helping in the Parish work, teaching catechism and visiting the houses. At first the Sisters were staying in a rented house near the Railway Station then after sometime they bought 5 acres and 11 ¼ guntas of land along Mysore-Ooty road for Rs.21,000/- and the same was registered. Meantime, the Superior, Sister Carmencita applied for permission to open Std.I which was granted on 28th March 1968. Day by day the admissions to the school were on the increase which continues even today. For some years classes were held in a rented house in the town close to the bus stand.

On 22nd May 1973, the Bishop of Mysore blessed the School Block in the campus. The following year 1974, Std.VII was added besides an additional section to Std.I. The School got its permanent recognition on 18th July 1978. In July 1986, a General Body Meeting of parents was conducted to raise funds for the construction of additional class rooms on the first floor, to accommodate children, as the classes were over crowded.

In 1996 on 3rd June the High School got the permission needed and a new block was constructed. Over the years, Shanthi Nilaya has seen many additional blocks rising in its campus, in order to provide better facilities for the students.

The Silver Jubilee of Shanthi Nilaya was kept up on September 12th 1993. This small institution has grown step by step in spite of many difficulties faced by our pioneering Sisters. Sister Carmencita the first Superior planted the seed, ‘Apollos’ (sisters) watered the plant, but it was God who made the plant grow. Our hearts are full of gratitude to God, who always walked before us to show us the right way, protected us in times of danger, guided our steps in times of doubt and supplied all that was needed for our spiritual and human growth. Thanks to our Lady of Mount Carmel, under whose leadership we work. Thanks to all the sisters, who have gone before us and to all those who were responsible for its growth.

Looking ahead, we hope and pray that this institution will grow from strength to strength in achieving its aims and objectives, of preparing young minds to face life with the motto “Love and Service”.

Carmel English School is developing step by step and is eagerly waiting to celebrate its golden years of service in 2018. The Management has decided to upgrade the School to Pre University College.The school takes care of the economically weak and poor students. Thousands of students have passed through the portals of this institution. Many are rendering credible service to the society and to the world at large!

Contact Details:
Shanthi Nilaya
B.N. Road
Nanjangud – 571 301
Via Mysuru
Karnataka
Ph. No. (08221) 228290
email: This email address is being protected from spambots. You need JavaScript enabled to view it.