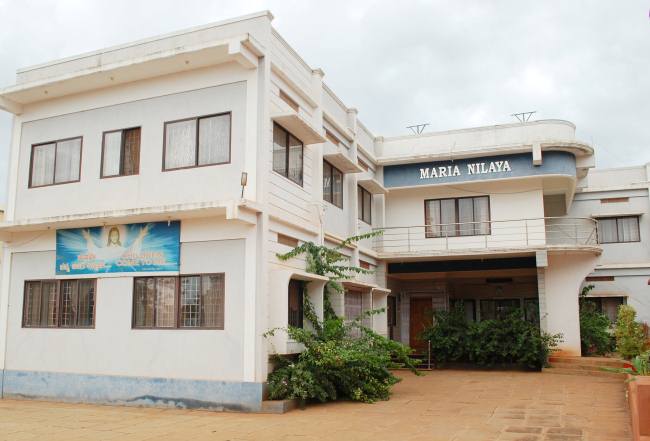 Bidar district at the top most tip of Karnataka State, on the borders of Andhra Pradesh and Maharastra – a very fertile field for Evangelization and Mission activities, was under consideration of the Bishops of the Region.

The history of Bidar Mission is unique in the annals of the History of the Diocese of Mangaluru. At the request of the Most Rev. S. Arulappa, Archbishop of Hyderabad, Rt. Rev. Dr. Basil D’Souza the then Bishop of Mangaluru had agreed to adopt Bidar as a mission of the Diocese, with the permission of the Holy See. With the arrival of the enthusiastic volunteer, Fr. Robert Miranda, Brothers Ronald Serrao and Francis Lewis, the first batch of missionaries along with the Bishop on 17th June, 1982, the Bidar Mission was formally inaugurated on 18th June, 1982 on the feast of the Sacred Heart of Jesus.

On 25th April 1983, Sister M. Veronica was elected as the Provincial Superior and based on the renewal programme of the Provincial Chapter the new Provincial Administration undertook the Missionary Apostolate. Accordingly the first foundation was at Bidar. A Kannada Primary School was opened in June 1983 by the Catholic Board of Education (CBE), Mangalure Diocese in Bidar and at the request of Bishop Basil, three A.C. Missionaries namely Sisters Concetta, Bertille and Maria Anitha were sent along with four regents accompanied by Bishop Basil D’ Souza and Father Benjamin D’ Souza.  They arrived at Bidar on 4th June, 1983.

The Apostolic Carmel Sisters were sent to be in-charge of the CBE Kannada Primary School, the first institution and Missionary venture in the Bidar District.  It was no doubt a challenging task as Bidar was the most backward district of Karnataka. Undaunted, the Sisters began their work, trusting in the Lord.

Since the Convent for the sisters was not ready, they spent the first two days at Mr. Samuel Sequeira’s house.  On 6th June, 1983 the Bishop blessed and inaugurated ‘Maria Nilaya’, the A.C. Sisters’ Convent at Fate Darwaza a humble dwelling provided on rent. Thus was born a Carmel for the Mission in Bidar. The Sisters continued their work at the place until with frantic efforts, land for the Missions was procured three kilometers away from the city for the purpose of constructing a School, Convent and the Church and on September 30th, 1983 the foundation stones for the School and the Convent were laid by the Bishop after Mass.

The Mission of the Apostolic Carmel in Bidar besides education was to strengthen the faith of the believers through the proclamation for the Word of God.  This, the sisters did through catechesis, liturgical celebration, ecumenism and witness to Christ among the people of other faiths.  Inter-religious dialogue and developmental activities, led to the liberation of the whole human person as well as of the human milieu.  The Priests, Sisters and Brothers worked as a Mission Team.  When the Missionary activities were extended to the Bhalki Taluk in September 1983, the Sisters kept in touch with the Bhalki Team too.

Sister Veronica, the then Provincial Superior of Karnataka took personal interest in the Mission and started the pioneering work in the field of education.  The actual classes started on 20th June 1983 with Std. I Kannada Medium having the name of the institution St. Joseph’s Convent School. The L.K.G. class in the English Medium was also started along with it; however it was discontinued after a year keeping in view the other priorities of the Mission.

Carmel D.Ed. College started in 2009 at the request of the Bishop Rev. Robert Michael Miranda, Gulbarga Diocese was another institute to be run by the Apostolic Carmel Sisters.  It was inaugurated by Sister M. Olivia A.C Provincial Superior and blessed by the Bishop.

The Sisters continue the Mission for which it was started.  Today the Bidar Mission and the Institutions have grown tremendously and have made a difference for the people of Bidar.

Contact Details:
Maria Nilaya
Near Shahpur Gate
Haladkeri Post
Bidar – 585 403
Karnataka
Ph. No. (08482) 227742
email: This email address is being protected from spambots. You need JavaScript enabled to view it.