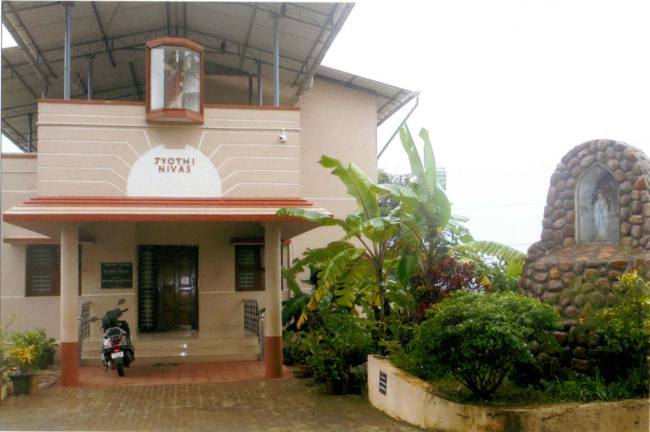 Jyothinagar formerly known as “Chapathi Nagar” is about 12 kms away  from the city of Mangalore. It was a colony of migrants from various parts of North Karnataka and Tamilnadu who had come in search of jobs in the construction work or at industries of Mangalore. They were living in tents by the road side.

Late Fr. Valerian D’souza S.J. along with Miss. Judith Mascarenhas who were involved in the upliftment of the people of this area renamed it as “Jyothi Nagar”. The families were helped to get loan to build houses and each of them were given 2 or 3 cents of land. They co- operated with the help given and soon were able to put up decent houses.

Most of the people were illiterate. Fr Valerian involved the A.C. Sisters to give them education. Jyothinagar project was started as a developmental work in 1986 under the leadership of Sister Agatha Mary. Sister Agatha Mary with her college students spent their time after class and on holidays to work on this project. Their effort was rewarded  as many of them learnt to read and write.

With the help of generous people and A.C. institutions the school was started in 1989. Later Sister Viventia being the first H.M. worked for 20 years to develop this area. In 2008 the Primary School was upgraded to a High school.

In 2006 a convent was started to render better service to the students. In March 2012 through untiring efforts the school secured government grant for the primary school.

In the year 2014 Silver Jubilee of the Primary School was celebrated. What was surprising to note is that the ex students took up the lead to celebrate the event and Sr.Agatha Mary who was then the Superior General the time was the Chie Guest of the function. What a happy coincidence! The apostolate is growing steadily and bearing much fruit. The students are doing well in life. Few of them who are residents of Mangalore visit the institution and render their generous services to give the coaching for our students in sports, games and co- curricular activities. May God be praised for the marvelous work God has done in transforming Chapathi Nagar to Jyothi Nagar!