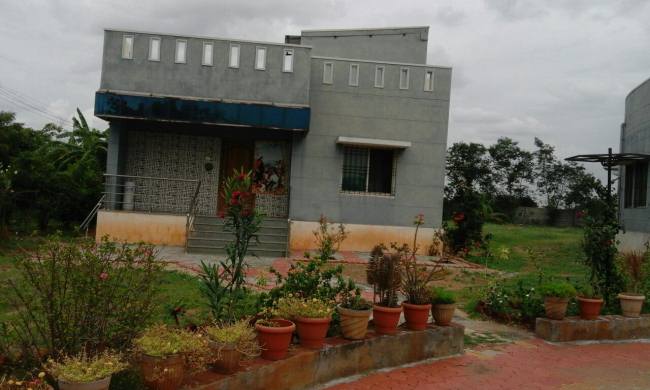 At the invitation of Rt Rev. Dr Henry D’Souza, the Bishop of Bellary, the then Provincial Superior, Sister M. Linette A.C. with her Council accepted it and started a School for the Differently Abled children.  She appointed Sisters Maria Jyothi and Marie Christine to visit Bellary and meet the persons concerned with the Anugraha Foundation Trust and the engineer to see the site (location) and plan the building. They visited Bellary on 13th January 2011 to do the needful.

The Anugraha Foundation Trust School for the Differently Abled children is a joint venture of Mr. & Mrs. Basavaraj and family and the Bishop of Bellary. It was registered on April 1  2009. The foundation has launched to perpetuate the memory of late Y. Umadevi and late Y. Mahabaleshawrappa.

Though the Apostolic Carmel Sisters came to Bellary in the month of May to do the preparatory work and to keep ready the place and to collect the information about the students available to come to school, it was officially inaugurated on 7  June 2011 in an old building opposite OPD ground. It was really a red letter day for the people of Bellary District. The persistent effort of the Rt  Rev. Dr  Henry D’Souza, Bishop of Bellary and the cooperation of the Apostolic Carmel Provincial Superior of Karnataka Province, Sister M. Linette A.C., made possible the “dream of Late Neelamma  Basavaraj - a school for the Differently Abled children of Bellary” come true .

This project was taken under contract for two terms between the Bishop of Bellary and the Apostolic Carmel, Karnataka Province.

During the two terms Sister Marie Christine was Sister in-charge of the house and the school with Sisters Juliana Mathias and Maria Sushanthi to assist her. They worked with the children and attended to all the community exercises.  They stayed in an old renovated church building next to St. Philomena’s School and attended Mass at the Good Shepherd Convent Chapel.   On 20th August 2011 the blessing of the chapel was done by Rev.Fr  Antonyraja and Fr Yagappa concelebrated the Eucharist and installed the Blessed Sacrament.

On the 29 June 2012 the long-awaited day dawned for the Differently Abled children of the Anugraha Foundation for it was the inauguration of a magnificent school building with all the facilities and staff quarters - a convent at the Tallur Road, Sridhargedde Village, SRK Nagar. Sister M. Linette, the Provincial Superior of Karnataka Province was the President of the function. There were also other dignitaries from Bellary. Bishop Henry D’Souza, the President of the Anugraha Trust welcomed all the guests of the day.

On 26th of July 2012 the Sisters and the students moved to the new building and on 29th July 2012 we had the Blessing of the Convent followed by Mass and the installing of the Blessed Sacrament in the new Chapel.

Our contract with the Trust was renewed twice once in three years but in  May 2017 it  was made permanent - to  take up the Apostolate of the Day Care Centre for the Differently Abled children. On 23rd May 2017, the Provincial Superior Sister M. Carmel Rita A.C. came along with  Sister Ida Barboza, the Educational Secretary to Anugraha, Bellary.  The residence, Anugraha Convent was erected with Sister Marie Christine as the first Superior and Sisters Kripalini, Maria Sushanthi and Lillian as members of the new community.

Ph. No.9449488433 (Mobile)
email: This email address is being protected from spambots. You need JavaScript enabled to view it.