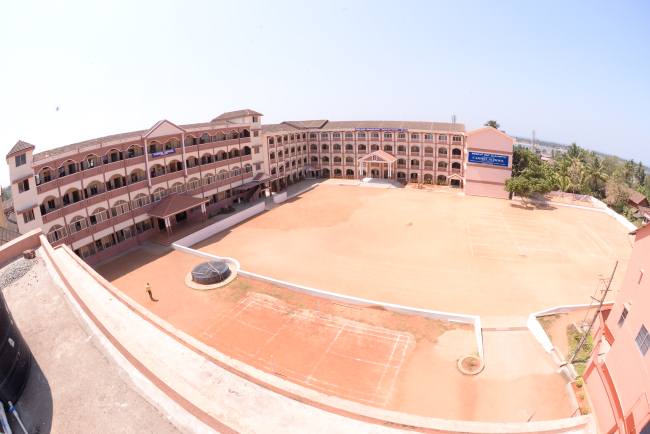 The beginnings of Carmel School go back to the 1940s. In the year 1946 the Government espoused the policy of divulging education in the regional language. Some parents in the locality of St. Ann’s were desirous of getting English education for their children and in reality it was a collection of tuition classes conducted under the direction of Sister Leonilla A.C. in a small building on the campus known as the ‘Garden House’. As this ‘English School’ gained in popularity the Management decided to open an English Medium School in 1951 calling it Carmel English School.

In 1964 it was acknowledged by the Education Department and got the official approval for Std. I to V and 12 years later in1976 the recognition was made permanent. Sister Eusebia who saw the need for co-curricular activities, with the generous cooperation of the students built a spacious hall in 1976. As the number of students grew and the old Post Office building was insufficient, a new spacious building with ground and first floor came into existence during the time of Sister Cabrini. In May 2011 another storey was added to the existing building by Sister Roshan to meet the needs of the time.

E-Platform for better learning, audio-visual based modules, which complement the curriculum content of the subject to make learning easier and enjoyable and regular updates through SMS were initiated in the school. With the winds of change and the desire of the parents to have the CBSE Syllabus, NOC was procured from the State Government to change over to CBSE in August 2014 and in July 2015 the School obtained Affiliation up to Secondary Level, from the Central Board of Secondary Education, New Delhi. Thus Carmel English School was transformed into CARMEL SCHOOL.