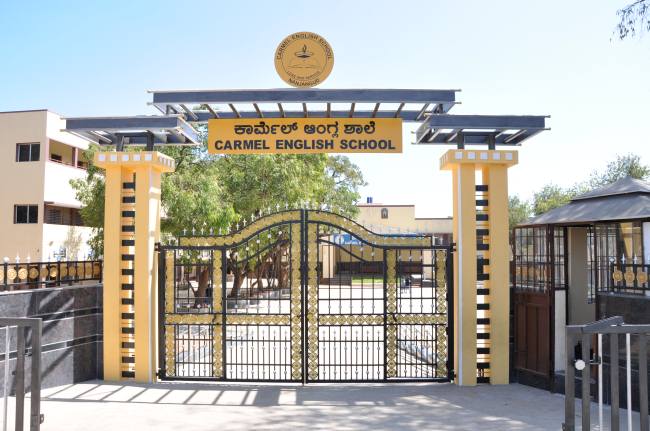 Carmel English School, Nanjangud was started even before the convent was established there. The Bishop of Mysore, Rt Rev. Dr Mathias Fernandes had been repeatedly requesting the Superior General, Mother Theodosia, as well as the then Superior of St. Joseph’s Mysore, Sister Carmencita to start a Nursery School in Nanjangud which could gradually be upgraded. Mr. Thomas D’Souza, the Copper Merchant was the spokesperson on behalf of the Catholic families in Najangud pleaded with the Bishop for this venture. On 1st June 1967 on the feast of the Sacred Heart of Jesus, Carmel English Nursery was blessed by the Bishop in a rented building. The school started functioning from 4th June 1967. Sister Carmencita applied to the Education Department for the sanction needed to open I Std. but to the disappointment of everyone the request was turned down and the sisters were on the verge of closing down the school. But, with the efforts made from many quarters, the long awaited sanction to open I Std received on March 28th, 1969.

The school started with 20 students on roll. A new school block was built and blessed on 22nd May 1974. The school progressed rapidly – morally, spiritually and academically bagging at least two ranks each year in the VII Std. Examination at the District Level. On 28th May 1966 permission was obtained to start the High School for girls. Many parents and our ex-student boys appealed to the Management to admit boys to the school, as they had no good High Schools in the vicinity. So with the permission from the Department, boys were admitted to the High School in 2015. Today the strength has grown rapidly. In 2014, Kumari Vindhya bagged the IV Rank at the SSLC State Level examination.
Carmel English School is developing step by step. The school takes care of the economically weak and needy students. Thousands of students have passed through the portals of this institution, many of whom are rendering credible service to the society and to the world at large.