‘Haste makes waste’ is the saying. It may be true but from some of the examples in the Scripture the events can be seen as being alert and open to the Spirit of God leading one to obey promptly. One is governed and moved by the Spirit urging him/her to take up the task immediately.

In the first Chapter of St. Mathew, St. Joseph is on the verge of divorcing Mary because she is found to be with child before they come to live together. The angel of the Lord in a dream reveals the truth about Mary and it is said when Joseph woke up he did what the angel had told him – to take Mary as his wife. He did not linger nor did he hesitate.

The wise men who came to pay homage and offer their treasures to Mary’s new born Son were warned in a dream not to go back the way they came; they did not debate or discuss on this issue, but immediately set out to their own country in a different way.

After they had left, the angel of the Lord appeared to St. Joseph in a dream asking him to take the Child and the Mother with him to escape the wrath of Herod and to flee to Egypt. So he got up and taking the Child and his Mother with him left that night for Egypt. Travelling at night with a new born Babe and the young mother on the lonely, dark path with the fear of being attacked by robbers did not deter St. Joseph from doing what God wanted him to do. His Spirit-filled life helped him to recognize God’s voice and God’s hand in everything and he obeyed promptly.

Mary went out in haste to be of service to her cousin Elizabeth who in her advanced age was in a delicate state of health. Her own pregnancy or her status as bearing the Promised One did not hinder her from following the ways of the Spirit.

When the angels brought the good tidings to the shepherds, they said to one another, “Let us go to Bethlehem and see this thing that has happened which the Lord has made known to us” – so they went in haste to find Mary and Joseph with the Babe lying in the manger. What an opportunity would have been lost had they delayed trying to find out if the news was really true!

Prompted by the Spirit, Simeon came to the Temple when the parents of Jesus brought the Baby to fulfill what was laid down by the Law of Moses. He could truly with a grateful heart sing the ‘Nunc Dimittis’ (Now you dismiss).

The wedding at Cana unfolds a series of listening and following the ways of the Spirit; Mary sensing the need, approached her Son to do the needful. When told that his hour had not come yet, she, undeterred asked the servants to do what he tells them. Jesus’ command, “Fill the water jars” leads in promptly doing what was told and then the miracle!

The disciples when called leave everything at once to follow the Lord. It was responding to the grace of the moment.

Veronica on the way to Calvary pushed herself forward to do an act of charity. She feared neither the Roman soldiers nor the leaders of the Synagogue who might have contemptuously looked at her. The act gave her the gift of His Divine Face imprinted on the towel.

All these passages and many more from the Scripture tell us that divine wisdom helps us to be open to the moment of grace. It is the moment, the one and only opportunity to accept the grace of God. If delayed or rejected it may be lost forever. We may never get it again. Human wisdom can come in the way of following the ways of the Spirit or obeying it promptly.

I remember my brother-in-law who came to visit me when I was a Junior in Lourdes Convent, Jayanagar. He asked me about the kind of life we live. I gave a picture of our daily schedule. Then he told me that I should be like the surgical instruments - the surgical scissors, scalpels, lancets, etc. sterilized, arranged neatly in a tray, ready to be used. The surgeon may need any one of them at any time. If any of them is not ready at the crucial moment it may be drastic for the patient. The nurse has to be alert and keep everything ready for use. The Divine Surgeon may need us at any moment for His mission. May He grant us the wisdom we need to be always ready for the call of grace at any moment. 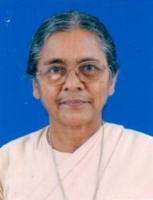